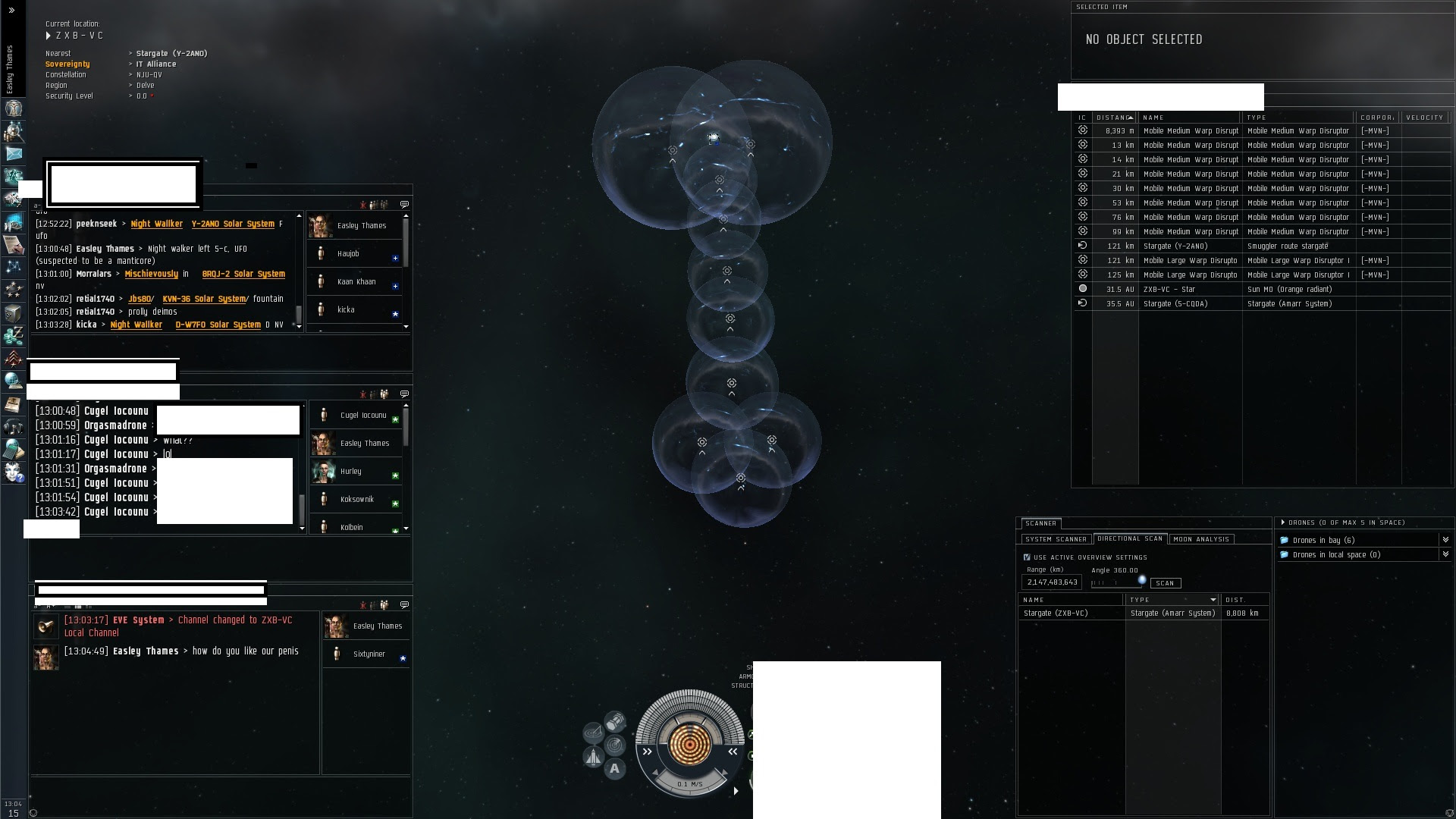 A Fight. And A Bloody Nose

Been awhile. Had some small fights in the past week, but no real time to write. Figure I will throw you readers a bone, if any are left after Capsuleer was taken down (are there any left?)

Last night was an ass kicking. In retrospect, it could have been worse.

Lost PG in his Scimitar due to RL halfway into roam. Moved up into Cloud Ring. Sat on a gate scout 2j ahead probing for a Severance plex crew in MJYW

Moved gang 1j up to be on gate ready to go. Bomber jumped into us, bubbles up failed decloak. Scout reports over channel command 5 NC.Dot enter local in MJYW. I debate, hear cynabals and fast stuff. My sense tingled but I kept gang on the gate. Too much fuckin chatter in fleet overpowered Sabre6's (scout)  initial report of local spiking. I thought I heard 10, but had to ask again to clarify.

Now I know people are arguing "snipe hacs, meh, we should work on a counter"

There is no solid counter. NCdot run snipe hac gangs every day. They are GOOD at it, because that is ALL they do. Not invincible, but good pilots in a shiptype thats hard to lock down. Their logi pilots are also quick on the ball, and many of their opponents (not saying always, but often) have TS spys who give their logistics pilots a supreme edge.
that being said...

I ordered everyone to GTFO gate asap. No time to waste. Warped back QXW gate (we were in MJ) jump on contact, warp XT, jump on contact. Idea was to bail through Cloud Ring in hopes they wouldn't figure it out until we were out.

Bonecaya in a command ship got caught on the in gate in QXW... sad, but he was in a slower ship. We also lost  a Scimitar... not sure how the fuck we lost him when Drakes got out but we did. And... he didn't report it a couple minutes later... which is perrtinent information (logstics are survival).

I also heard 4 scimitars for NCdot... turns out they had five...

Anyways, we jumped into XT and held on the 5-ML gate. Their scout entered XT and I jumped gang 5-ML, hoping they would think we went to Syndicate.

Their tacklers were on us in 5-ML on B-DB gate; also snipe hacs are FAST. Fast warpers, fast aligners, etc. they were bumping local when we landed with the tacklers on the out gate.

I made a decision to fight at that point, rather than losing 1-2 people each gate. After discussing with Molle, I made the right call... to a point. Molle said 30 bc vs 30 snipe hacs lose every time. I know this, but 30 running bc quickly dwindle to 30 snipe hacs at each jump. His plan would have been align, burn, kill Sabre, warp. You would lose a few on the warp out, but the majority of the gang would survive. I did about 3/4 of those things. Unforunately I missed the last step... warp.

We jumped O-BD and aligned to sun. Why? DOOM always aligns to sun. I needed to keep us in range as long as possible, as DOOM would be spanking MWDs to outdistance us so that our guns couldn't hit while they were well within optimals.

Primaried their Sabre, he died. Primaried Vince Draken's Alt... he got to low shield and reps were on him. Switched primaries several times, but it was pointless. Logstics kep their pilots alive, no matter who I primaried.

As discussed, I should have popped the Sabre and warped everyone out. We were all out of the bubble, and they only had 2x Stilettos and 1 Cynabal for tackle (Scimitars had points but they didn't come back to the gate until later). Hell, I was primaried as we were warping out, and they didn't have a manual point on me and I laughed as I warped off the field. We would have lost 3-5 more guys and the rest would have survived... I just hate the idea of leaving people behind. I also thought we had 4 scimis and they had 4, and figured we would drop a few of their HACS as they aligned out. I figured wrong...

As we were boucing safes I sent scouts to the gates, and pinned down the location of the NCdot fleet. It was a large system, with multiple exits. Choosing an exit gate 60AU from hostile fleet would be good, as all gates had scouts assigned.

The plan I came up with was allow myself to be tackled (DOOM love/hates me, and would not resist warping entire gang to kill me) while gang escaped through Outer Ring. I mentioned this over channel comms, and got tackled at a moon. As soon as DOOM fleet showed up on directional I had fleet warp 5-DMLT and jump on contact. Cardking took over at this point (I can hear you screaming, why let FC die, but we had two great backup FCs on comms, so no worries), but due to miscommunication he jumped gang to X-T. I was trying to kill my tackler and didn't notice, until he jumped gang into QXW... at which point I was like WTF, as we went in a circle and I was dead and they were hunting again. So, Hurricane down fleet was on the run with a 1/2 jump lead again. With long warps, that was a bad situation.
So Cardking decided on a logoffski in MJYW, Doom gave up after half hour, the survivors killed a Test gang and home they went.

It hurts, but we gave them a fight. Lost 2 ships before the fight (the Sleip and slow Scimitar) and 10 ships in the fight. Only killed a Sabre. As we were BC heavy it wasn't horrendous, but being unable to kill even one HAC or Recon is depressing.

Needless to say, the stragglers won't be straggling next time...

Vince (CEO of Doom) had nothing nice to say afterwards, which is no surprise. He insists he caught us running, which contradicts the fight they got... but meh. I have no beef with DOOM, but the consistent shit talking is a bit old. They have failed at holding space time and time again, which has turned into "we didn't ever want space anyways". They aren't strong enough to help Evoke out in Cloud Ring and farm pets of IT and teh NC instead. To each their own I suppose, but as Molle said. 30 BC vs 30 Snipe HACs, what did you expect?

Been sick the last few days, leaving not much motivation for EVE. I'm hoping to be back in commission soon.

I can't go into huge detail on the prep, but the synopsis is as follows:

Convo'd by someone as soon as I logged on. I had just slept for 8 hours (sick) and wasn't really in the mood to do anything, but there were reports of LAA Alliance capitals on a CVA pos.

CVA wanted help, and were willing to help us, help them.

Got more info, and arranged some stuff with CVA leadership while getting a fleet up. We formed up capitals and support.

Looked as if the LAA caps would leave any moment... so we bridged in 40 support inititally, using a CVA cyno. All the LAA caps were warping, but two were caught by CVA in bubbles.

My idea was to keep LAA interested and to "show our hand".

What happened was just funny.

We killed their two carriers.

As the second carrier was dying, the LAA support fleet numbering 60ish landed on the POS. I told fleet to warp out towards sun, we lost one Phobos and one Scimitar.

We safed in system as second half of the fleet finished forming. After 10 min or so, LAA got cocky,

They brought in more caps.

We had cyno set up... and warped the 40 I had, along with another 40 bridging in. We kept caps on standby, due to the number of enemy support in local. And after all was said and done... we didn't need caps at all. :)

CVA bubbled all the caps, we started the fight. I was sucking at target calling, as I was in a nano cane trying to sort macro movements.

Hom3grown took over and executed it perfectly. We engaged their subcaps whilst holding their caps down.

It was a massacre. We lost 2 more ships. One was a Cane that we killed, overview glitch showed him as neut. Second was some idiot who lost a Manticore to one of the enemy carrier's smartbombs.

We killed approximately 83 of their ships. Including 7 carriers and a dread. A second dread self destructed before we could knock him down.

Due to the smartbombs the "sides" of the battle report are a bit messed.

Hom3 was awesome at the target calling, and I arranged the chess pieces to make it happen. a one-two punch.

Lots of people would say IT is full of carebears etc. Yes, there are many carebears. But there are quite a few killers in the alliance, and MVN is unorthodox and good at its job.

I got quite a bit of flack from other alliance leadership afterwards, because they didn't fully understand the situation and I didn't have time to spoon feed them details as events were unfolding. But, we had things under control (MVN leaders, scouts, etc) and it went EXTREMELY well.

Interesting to work with CVA, even if it was a temporary situation. Thanks for the kills.

As many of the other bloggers on the blog pak have stated... I first learned of the blog pak through the Capsuleer program for iPhone.

Without Capsuleer I would never have started writing about the Eve experience. I also would be much more lost as to my skill que and market playing.

The fact that CCP is letting Capsuleer go is... not too intelligent. "Mobile experience" hmmm....

Then again, I am never astounded at CCP's lack of foresight these days. This latest expansion is a perfect example... with not one but 2 emergency patches!

I lost quite a few solo kills in my Sabre due to the new patch blowing ass and not being able to decloak, bubble and approach like I used to. Instead my grouping of buttons would keep coming up...

So, there are some petitions and stuff going on, although my confidence in the power of petition is pretty weak. But maybe someone with a half brain that can actually make decisions at CCP would open their eyes and see what every business likes to see.

A successful mobile platform, whether free to the player or not, is an opportunity for sponsorships, advertisements, etc. Maybe a one time fee? Monthly fee would be a bit steep... but you would still have some people bite on it. Equilibrium would probably be a one time download fee. iPhone OS, Android, maybe even BBY or Windows Mobile. It would be so pro...

But instead CCP is being... CCP. It will probably take some time of 20/20 hindsight for them to pull their collective head out of the giant ass its in.

Not much happening in the life of PK this past week.

Inbetween studying and taking tests, I have been involved in clean up of sov structures in Catch.

I grabbed all my stuff from low sec (Yong) this week, as well as a couple of corp mates stuff.
at 7:31 PM No comments: