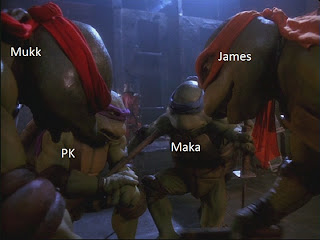 -A- formed up for a Stain Empire pos coming out, no big deal. Reports were that dreads were being asked for so we decided to form up tonight. I was originally thinking Tengus, but we decided on Oracles for a more roamish appearance so as to not spook our prey.

We bridged through Hurley and started moving nearer to LXQ2. I was scouting ahead in a Stiletto for fleet (no pimp armor ships in the hangar) and found xdeathx scout one out of destination, so we hid in a side system and waited patiently for the pos to come out of reinforce. We had neutral eyes in system so intel was flowing.


Cyno goes up a few minutes before pos comes out and in comes carriers, dreadnaughts, a couple supers and.... two titans??

I immediately asked in fleet for a tally on dictors and which ones had cloaks. We were a bit light... and I instructed light tacklers not in dictors to switch into dictors once the fight started (Uemon was 2j away). We were ready to grab dreadnaughts, not supers, and as such were light on dictors.

POS was down to 30 seconds when in came the xDeathx fleet. We sent in dictors first, and as they were initiating warp to the hostile capitals we brought in the main fleet. Bubbles went up (the initial bubbled was done by Tek Enetheru, the owner of the POS), and the Erebus and Avatar were tackled. I was horrified to see a couple dictors die immediately, and started moving towards low sec where I put together a terrible dictor fit.

While I was re shipping the Avatar jumped out, but the Bus was on field and going down. WTF and Legion brought in carriers for reps, but we kept them at range as they cyno'd in. Soon enough we noticed PL logging in en masse and knew we had limited time before they came in. We made sure we were ready to bubble their cyno. Erebus was dropping rather fast, and Nulli was on the way with Naga's. Sure enough, the Erebus died about a minute before PL jumped in the usual supercapital fleet. We kept them bubbled out of rep range for the carriers, and NC. appeared to come in shortly after. They sat in a ball, keeping the reps going and such.

The PL and NC. supers were separated from the xDeathx and WTF carriers so we got to work on those. Initially we discussed bailing because fighting a 40ish man supercapital blob with Oracles is kind of pointless, but decided to stick around for the carriers and see what we could do. With Nulli landing on field it gave us more dps to work with.


I dropped a second and third bubble, securing the prey while the fleet landed. We set up defensive bubbles around the Aeon and got to work. As it turned out PL had already jumped out, and NC. Aeon was now in trouble. As we found out later, as the order for the supercapital fleet to warp was given, this lone brave Aeon stayed behind and got himself bubbled.

We shot at the Aeon for 5 minutes or so until a cyno went up and in came PL (again). We moved to range and had a discussion again on what we would do. Since we weren't taking much damage at all (no support will do that) we started shooting fighters and fighter bombers, de-fanging most of the supers and forcing those with FBs to keep them docked. We had about 20 bubbled at this time. The decision to bail again was discussed and dismissed and we decided to let this play out.

After 10 more minutes of dancing NC. warped in a support fleet of Rokhs and died horribly. Props for trying, but that was just meat into the grinder. Bombers appeared constantly and were shot down, the number of bubbles far too great at this point for bombing runs to clear.

At this point my eighty bubbles were almost gone, I warped to an elite destroyer wreck and picked up another 60. Word came through that Goonswarm was on the way, and TEST as well. I was also told to beware of TEST, as some of them were in the Goonswarm fleet and coming to shoot NC. and PL, while some were coming to try save NC. and PL.

A few supers that were not bubbled jumped in one-sies over the course of about 15 minutes. Those were the ones that had no order to leave field but were fleeing due to self preservation.

I gave the order for supers to log in, and there was no argument from the other FCs. As if PL heard the order (Comms spies ftw!) all the non bubbled supers jumped within minutes of the order. Left behind were 8 supercarriers, and as Goonswarm arrived they went from being skimpily covered in bubbles to smothered in bubbles.


Our sub caps got to work along with Goonswarm and we focused fire on supercarriers, one by one. Occasionally the oddball Severance, TEST, or whomever was primaried and killed as they shot our dictors. The order for all spies to kill -A- dictors was actually given to spies in TEST and Goons, which was funny.

Rote Kapelle ended up landing on field at some point as well, on the PL/NC. side. Random, but it didn't last as they took some losses and bailed rather quickly.

We never ended up dropping our supers on field, as each supercapital died in turn to sub capitals. All eight died except one-who drifted off the grid (which was spastically screwed up) and was no longer bubbled and jumped out.

I traded ships with a friend and got on one (1) supercap mail in his Loki. My Sabre was so hastily thrown together I had no guns. I dumped over 110 bubbles on those supers though... it served me well.

The fight was wonderful, lasting close to three hours. Props to PL/NC. for not self destructing.

Without knowing the outcome of that one dead titan, I was glad I switched to a dictor, as we lost many dictors and many dictor bubbles to smartbombs due to terrible piloting.

In the end, due to Mukk's target calling, Maka's field coordinating, Kordent's probing and great piloting by our fleet we had a blast.

Nulli was pro (except for that bombing run) and Goonswarm was surprising and helpful. I got repped by Condi Scimitars in that fight on more than one occasion.