There are many who talk of various improvements to the game. As much as I hate the current sov-system, it works.

Not well, mind you, but it works.

Low-sec, on the other hand, is broken. Severely.

What incentives are there for the life of low sec? For most low sec is simply a place you wave to as you pass it by en route to your real destination. For carebears its too risky, and for pirates its the only place you can go.

As a result-its pretty empty. The life of a pirate is fun but gives no real benefits. 15 minutes of GCC after any kill, penalties for negative security status and the inability to reap any benefits for that plunge.

The first thing I would love to see are gates for pirates. Travel incentives for those -5 or more, usable only by them. They would be "flash points" for warfare and skirmishes between pirates or anti-pirates. Although I don't care about faction warfare much, that same idea could be used as a basis for faction warfare groups as well (fight for control of the gate). The benefit would be an INCENTIVE for being a pirate, instead of penalizing them only.

Also, missions for pirates. Instead of warping to a site or some shit that involves shooting NPCs... Make it a blood sport. "go to X system or constellation and kill 5 people within the next day (not in your corp/alliance". Accomplishment gives you some good isk and encourages pvp not only for pirates to kill bears, but to kill other pirates. On the flip-side, give some anti pirates missions to kill pirates. It gives the newbs an introduction to EVE PVP through the PVE path.

Obviously these are just some quick ideas, and one can poke holes in some of the theorycrafting (like killing your noob ship alt to accomplish the achievement). But you can use it as a basis to try and find some reason for people to LEAVE EMPIRE and for the life of the pirate to have some relevance other than YO BRO I AM -10 I AM COOL.

CCP needs to bridge that gap between PVE and PVP or risk polarizing the community even more between null and empire dwellers.

Also, to those who want 1 kill to make you -5 and one pirate kill to pop you to good standings...

you are literally retarded. quit the game and play wow you piece of shit.
at 11:33 AM 2 comments:

They offlined their jammer in their home carebear system and we saw the cyno on map-so we went to check it out.

With 1 minute left onlining we dropped some shinies to incap it for fun. Code is bitter because he is sitting in a Guardian repping the cyno jammer. 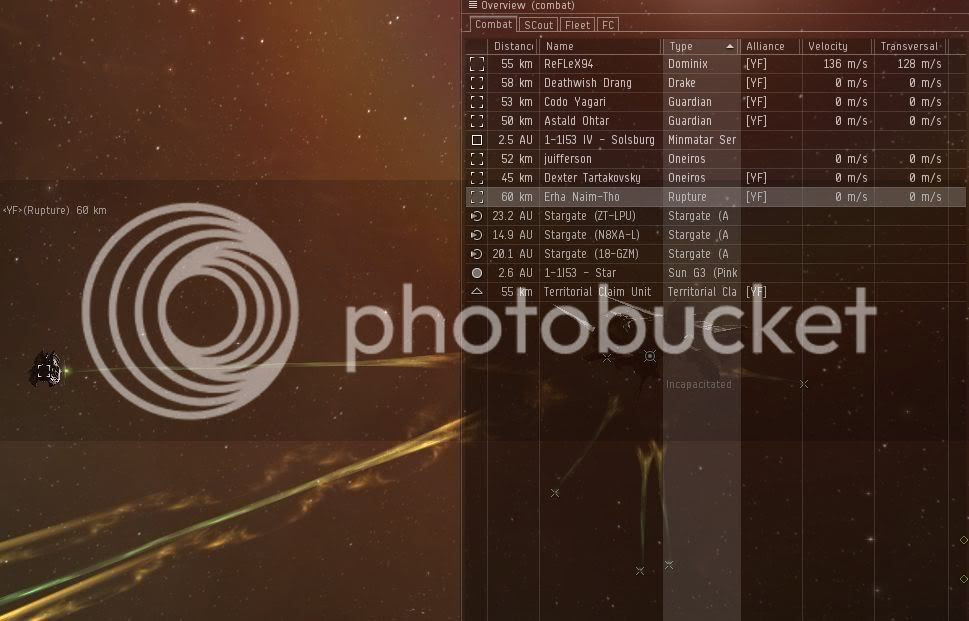 Doink put on the show

huge fight in C-J (which I missed)

So early on before the fight actually started, some random RA guy started yelling at me in local.

My response was simply "stfu stupid noob, RA doesn't even have an OP for the defense of their capitol"

I can tell you that -a- & CO russians were not sleeping. For this fight, -A- wanted it more. You can stretch that for a few weeks now, but tonight we saw it more than ever.

GFs all around, props to Shadoo and PL for trying something new, Goons for jumping a long ways to die in a fire in a massive fight.
at 8:52 PM No comments: