Winter Sets in on the Eastern Front 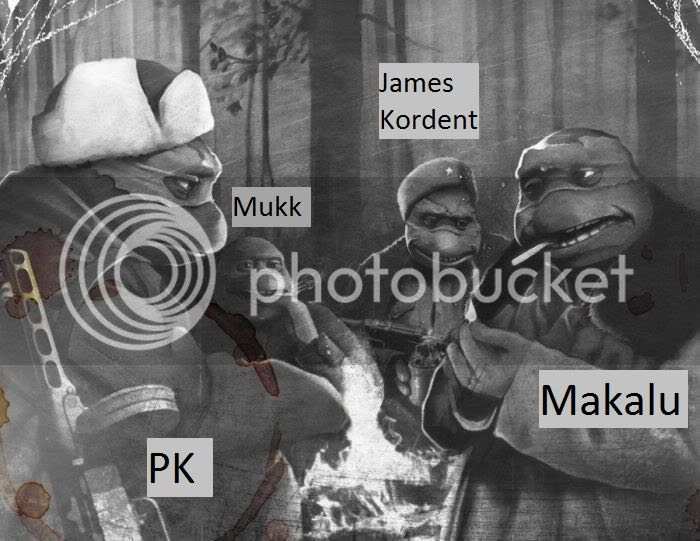 Winter Sets in on the Eastern Front

This week has seen some heavy combat on the Eastern Front. Tenerifis burns as -WTF- evacuation is in full swing. -A-, staging from its forward base in DZ6 has launched a blitzkrieg attack on -WTF- and master RA. Although timers have been saved in Immensea and Tenerifis, the victories are overshadowed by the massive casualties taken over several days of fighting. The most recent clash involved a massive fight based around RA + WTF vs -A- and ROL, with RA bringing in titans and supers.

The fight started on the T6GY gate in 46DP. -A- Tengus in T6GY, RA in Abaddons and WTF in Drakes/kitchenfleet waiting with drones out at optimals waiting for the inevitable jump in. Then ROL landed on gate, and -A- jumped in. CCP smiled on 46DP that day, and client disconnects were minimal as the fight started. Several tengu's instapopped while Makalu brought the warriors to range on the gate. RA and their minions switched targets to ROL while -A- moved to range and rained hellfire and brimstone down upon the helpless Abaddons and Drakes. Their logistics died quietly, while Fuufa screamed loudly everytime he died (all five times). Within a few minutes Red Alliance fled the field, WTF running to station shortly after. The fight resumed shortly thereafter in 77S on the 46DP gate, with ROL and -A- left alone with RA for several minutes while Controlled Chaos tried to figure out what was going on whilst docked in 46DP station.

Needless to say RA didn't like being locked in a room with the perpetual gangbang and immediately pushed the flashy red button-and in came several titans with supercarrier support. Makalu, un-phased by this new development continued calling primaries, which included the entire RA guardian complement which driftend into optimals. Eventually WTF jumped in as they finally figured out their masters were engaged, and Fuufa died (again). With KGB agents in place, PK told Makalu to only call RA targets as WTF were rendered combat ineffective by general retardedness and FC ineptness. With the full onslaught of the Tengus focused on RA entirely and their titans completely useless they fled the field yet again, leaving their "allies" on field for another 10 min to get eradicated.

The general RA member found himself in shock as their perception of not only -A- but themselves was shattered by reality. Not only were their pets incompetent, their fleet embarassed-but the -A- they had been told was dying and defunct was in fact vibrant and alive and raping them anally without breaking a sweat.

-A- won soundly, annihilating not only ships but morale of the enemy fleet. The loss only hastened the evacuation already ordered as -WTF- moves deeper in to RA controlled space, even as RA internal drama continues to raise eyebrows.

As 77S armor reinforce counts down, which only days ago was "unthinkable" according to lead Controlled Chaos FC Fuufa, the future of their alliance looks dreary as Sage continues to be a shadow after apparently snapping during a rape session of one of his fleets. How far can an alliance based on mining and ratting retreat before its members choose other homes? PL and NC. are certainly in the picture, as they form for RA CSAA timers (to the delight of the average member) but haven't become involved as of yet in the conflict. Each step backwards brings the -A- USTZ onslaught closer to the northern front in Uemon where Solar is continuing to spit in the face of UAXDeath.

Silent Dodger's pep talk today laughed at the thought of -A- being any real threat to RA, but it came across as more damage control for a floundering alliance. As the snow falls and the chill sets in, the brave soldiers of -A- armed with Tengu's and Drakes push onwards towards C-J. If the fighting so far is any indication, Dodger may be chuckling from a new home within weeks, unless the Hessians are brought in to try and stop the rape.
at 10:50 PM No comments:

The patch scene at CCP was looking up recently.

T3 battlecruisers, beautiful backdrops, aligned stargates and many other small fixes that had players saying "well they finally got it right".

Then last week CCP bent us over and took our money yet again.

Currently I can't take a fleet roaming without losing 1-2 people each gate due to server-side issues that cause your client to crash.

From what I've heard its a handoff error of sorts-possibly due to time dilation. Combined with glitches of all sorts including the covert bridge glitch (if you covert bridge the game thinks your bridge is up eternally until you clear your damn cache).

All these issues have made this the worst patch since Dominion hands down. Currently -A- is running tengu fleets, which means we are absorbing 1-2 bill in lost tengus during a fight simply due to disconnections.

I don't know what the hell is going on in Iceland but I would love isk, some free ships and maybe some game time for all the bullshit we are putting up with currently.
at 11:45 AM 1 comment:

The last day and half has seen RA get pounded several times.

first was by Nulli and -A-, which saws some carriers die (and some get out). I FC'd this at 4:30am... but managed to get up in time to run a fleet with Maka.

This fleet saw Controlled Chaos embarassed-and RA embarassed even more. Fight started in 46dp on a jump in by -A- and ROL into RA and WTF waiting.

A few tengus died on jump in-but once we got at range.... the rape began. Eventually RA bailed and WTF quickly followed suit.

The fight continued in 77s-where RA desperately dropped titans and supers to try and compensate for their piss poor performance. Eventually WTF figured out what the hell was going on and undocked from 46dp and jumped into 77s to join the fight.

None of that mattered. In fact we concentraded fire on RA because Controlled Chaos was shambles-they had terrible back up target callers and Fuufa was constantly dead (he was killed 5 times). Most other RA pets re shipped at least 3 times.

Eventually the selective targeting of RA paid off-RA bailed first-after getting their supers off field, leaving Controlled Chaos and other pets to fend for themselves.

This video of both 46dp and 77s is brought to you by Nashau-many thanks. And dub-step is awesome-don't hate.

(notice the titans repeatedly trying to shoot the tengus-and missing)
at 11:19 AM No comments:

Most people agree that having more than one fc in fleet all working on important pieces of the fleet composition means that you have a great chance at a successful outing in a fight.

Today we took on a CVA gang running through stain. James Kordent was running intel, I was running dictor/scout and Makalu was calling the field.

We knew when they were coming and hid next door to their outgate-cloaked dictor and waited. James fed us play by play, and their scout landed on outgate with me. Perhaps suspicious, I decloaked and bubbled him, forcing him next system (worried he might scout us).

As if on cue (or maybe they wanted my Sabre dead :) <3 CVA ) they spiked local and started warping to my gate. I MWD'd up and cloaked, and Maka brought in the fleet. Their warp was significantly longer than ours, and we both landed on the edge of my bubble. The crucial point was when instead of burning to the gate and jumping they turned around (although in all fairness we had a dictor on the other side too).

I decloaked as they started aligning off and dropped a secondary on their fleet, as did our other dictors. Logistics did a good job and we duked it out.

With lots of the strategic fighting winding down, I will hopefully be running more roams and less CTA fleets, which I hesitate to blog about due to the sensitive nature of the material.
at 11:09 PM 2 comments: