Vacation and School and EVE

Back from my vacation, start school this week. Life is busy, but I manage to find time to hop in EVE none the less.

A few days ago I took out a roam into Catch. With the -A- situation not looking too good, I figured I would see what kind of skirmishes/evacs we could find and kill. We moved into Catch from 49-U and couldn't find any targets...

We went out with mainly assault frigates, along with a couple dictors. I was scouting in my Dramiel, and as I jumped into Q-U and started warping out gate (calling gang in as I did so) the neut in system (who was in Raven) decided to land on our in gate as I was jumping gang into system.

"If you haven't jumped DON'T" I yelled over comms. "Reapproach if you have, Raven jumping throught right now".

I smiled when I heard "I got him" from one of the gang. This quickly turned to anger when I heard "Oh shit, how did he get away".

After consulting our pilot, he said didn't bother to point him because he thought the Raven was out of range. I asked him how far he was... 20km. Well what about that warp disruptor he had on?

The gang quickly spoke up in various forms of "Thats a scram dude. Disruptor is 24km you fail thanks for letting the Raven go".

So glumly we pushed on. I jumped into next system, one neut in local. Fleet was holding in EX6 on the HY- gate, as I hit my scan while holding cloak. Too my surprise the neut landed on grid with me, at 0 on the EX6 gate.

"Fleet, Tengu landed on gate, I'm gonna push him through. Bubbles up when he appears, burn for declaok tactical overlays up!"

I broak cloak on my Dramiel and burned right at him, I didn't even get a chance to lock him up before he jumped. Into my gang.

I waited for the "he cloaked, didn't get him" interdiction nullifier crap. To my surprise, Easley called out web and point, followed by the majority of the gang. My excitement grew as his attempts to reapproach were completely failing due to multiple webs (good thing about an assult frig gang, no shortage of tackle/webs). I used my Dramiel's 6.1K speed to bump him 25km off gate.

We kept shooting, but I got a bit nervous when, after 2-3 minutes, he was out repping our DPS (wtb another bomber, and Homegrown in his Manticore failed for not having a target painter :-)). We kept on plugging, and eventually, he passed point of peak recharge and started feathering his shield booster. We started overheating, and he leaked armor. Then, all of a sudden, he just went boom. We dropped a bubble for his pod and thanked him in local.

I was extremely curious as to his fit, as his tank was quite good, and the DPS he put out was pretty damaging. Without Agro in his Falcon it would have been hard, maybe even impossible to take him down. He would have forced our AFs off field one at a time, making them spend valuable time warping in and out. With our obvious DPS difficulties he might have perma tanked until friends came to help. ECM = Win.

So, the Tengu fit... as I suspected he had accelerated ejection bay. No covert ops config; explained the heavy punch he was delivering. No interdiction nullifer of course... and, yeah. Pithum A-Type Medium Shield Booster. Just under a billion in Jita. Explained the insane repping. 2x Caldari navy BCU also dropped...

Needless to say we were happy, and the loot will be split among all those in gang.

The rest of the night proved somewhat uneventful. The plan was to head into Curse, which was halted a few jumps in by an Outbreak gate camp. I thought about either breaking through it or engaging... but I have learned to assume Outbreak has more. Ziggy Stardust and company are quite adept at PVP, and by that I mean they don't take fights they can't win and the fit their ships ridiculously expensive, yet effectively.

They also use out of corp toons frequently, as bait or repping or extra DPS. So while there may be 3 Outbreak in local-don't count out those other random neutrals. I learned that the hard way last week.

So instead of risking my gang and the 1.2 billion of loot we had with us, we turned around and headed home. Whining in fleet about the time of night also contributed to this decision. I was more than happy with that T3 kill, so off we went and returned home without incident.

Last night we had a black ops roam led by Homegrown. I was able to hop on and participate. We circumnavigated a Cry Havoc BC/Logi fleet and headed into Cloud Ring. Unforunately for us, we weren't able to find any targets. I wasn't scout or FC for this op, which was nice for a change. I also spent half the roam on the phone :-) I don't recommend doing that unless you're in a cloaky and you know your FC won't yell at you for it...

Will continue to write the stories as they happen. Being back at work is not the most fun, but it does give me time to write. School started today, however, and I do need to buckle down on studies as I start hitting the upper level classes for my major...

Riding has slowed down a bit, as a dear friend of mine was involved in a motorcycle accident. The gist was, at high RPMs he hit debris in the road, resulting in a twist on the throttle. Not prepared for the sudden acceleration he lost control of the bike and layed it down. He was fine, and had almost stopped rolling when an inattentive member of our gang (that we didn't really know, he just kind of tagged along) ran over his leg with his Honda CBR1000. My friend's leg was broken in 5 places with exposed bone, an injury which was complicated when the EMT in the ambulance allowed his foot to twist 180 degrees backwords on the way to the hospital. That destroyed muscle tissue as well as tendons/ligaments. He did have surgery, however, and is now at home with lots of drugs and a 6 month recovery time. A bit of an eye-opener, a friendly reminder that I am not invincible despite the adrenaline screaming in my head to the contrary. 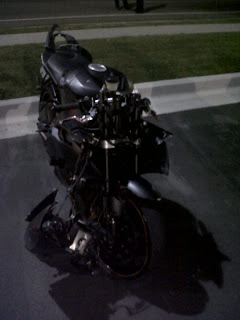 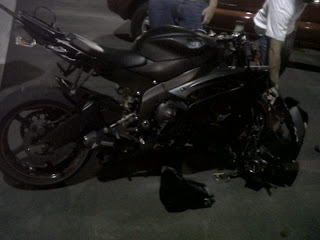 Great story (congrats on the Tengu kill!) until I got to the motorcycle accident, made me cringe. As a biker myself it hit pretty close to home, hope your friend makes a full recovery.

If he'd had 1 of his rigs at T2 level he would have been completely cap-stable. Good thing for you he wasn't!

Congrats on the nice kill!

Once again nice write-up with several lessons learned included. Sorry about you friend. If it's any consolation, it could have been worse. I lost a good friend several years back when crap fell off the back of a truck. He swerved to avoid it, lost control and hit a pole. He died instantly. Lesson learned - follow distance is critical. Too late for him, but maybe not for you. Drive safe/fly unsafe.