I was at work, but here is the basic battlereport I got from Kugu's from NCdot, which falls in line with what I heard when I got home:

"We formed up in RR BS with the intention of killing caps as they were moving about. Due to us ganking a chimera in a Sanctum we were a little late forming.

We had missed a few JFs and some carriers but got formed up on titan to bridge. Hictor pilot saw a rev come through the cyno/gen and Twink decided to go for that at least. We killed the rev, incapped one warp disrupt and burned into shields.

Dest home was set and whilst aligning off towards our out gate guy says on TS that a carrier has aggroed on the station. We get there and a whole bunch of carriers undock and we work on one archon who is outside of docking range.

We kill dictors but nothing else as he is being repped by the carriers. They warp in a BC gang to station at this point as well. Lose a couple of BS here but warp off to out gate. Up until this bit it is all in a days work really local was at 170 our gang was like 70 at that point.

Scout reports carriers warping off and like 5 or 6 land then more. Super carriers are rage logged on or where in fleet before. Twink orders a cyno up and the caps we had jump. I hadn't been on channel command or whatever at this point so assumed we had intel etc
Fairly soon after this a bunch of the carriers die but it quickly becomes necessary to scroll the overview with just dics/hics selected :S
Support tries to kill some and a cap or two gets out but sadly more and more come in and it is a case of waiting to die really. My abaddon burned through a few times trying to kill dictors but kinda in vain...most of us decided to stay and die to help anyway...

After the last aeon dies we actually have an amusing smacking/piss taking chat on TS for a while with the mothership pilots taking the jokes well."

From IT (not my grammar):

So how did it happend?

We had an idea in x13 to try and bait NCdot caps on a cynogen, with the help from fountain allies. We got a few caps from blast to play as the initial bait, and intell came out that a small Ncdot roaming gang was moving around. This was just perfect. So we started to notice some more supercaps from IT about what we where trying to do. And thank god they where still happy to join another x13 waiting game since we had tryed 3 times earlyer with no success.

But then Ncdot started to gather a fleet of 40+ bs with gaurdians and hics as support, on a titan. It began to look interesting, where they expecting us or not?.

None the less, we where just about rdy to get the bait rolling, when suddenly Ncdot fleet bridge. Where did they go? Anyone know?.

6VDT local spiked, SCOUT TO THE CYNO!!!, what are they doing. Fuck they dropped on a friendly dreadnought (stop using the cynogens guys). So ncdot is in 6vdt with a decent bs fleet, wtf to do, now everything was fucked. Well atleast we could fight the bs in a carrier blob. So I ordered all x13 to switch from dictors and back to carriers, since at this moment the hope for supercap kills was long gone, so no need for a dictor fleet.

Small skirmish on station, we killed a few and had no problem to rep up their damage. So ncdot bailed as a 30man it roaming gang just came back and joined us at station.

Ncdot went to the b17 gate, hell we might get lucky to kill a few more before their aggression is over, so x13 followed with our 15-20 carriers.

We start to shoot, ncdot launched drones and opened fire aswell, cool fight is on.

Suddenly I hear on ts, Nuker!!!, I see ncdot caps locking on. would they really come in ?

well everyone get rdy, get to login screen, as you never know.

But then, cyno opens, ncdot supercaps appears. EVERYBODY LOGIN ITS HAPPENING RIGHT NOW!!!. Dictors to the gate at 0 NOW and bubble. our 15 carriers on the gate took alot of beating from 150+ fighterbombers, we had already lost 7 carriers before our supers and caps started to flood in, but they arrived just in time to save Sir rup at 90% hull in his thanatos.

from here on, it was just a matter of keeping ncdot bubbled, and get DPS on them. Rest is on the Killboard 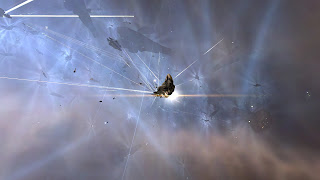 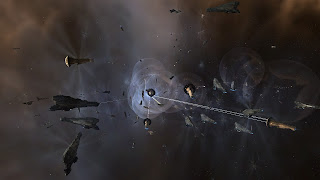 All I can think to say is that must have been a real adrenaline rush.

In the days following Capsuleer I have started using the app Pulse News. It's free, at least on the iPhone, and adding this blog was as easy as typing 'aggressive tendencies' into the search bar and clicking the plus. Also, there's an in-app browser so we can read all those juicy killmails without leaving the app!

Keep writing PK, this is my favorite EVE Blog, and I have learned more from you than my own corp :)