Yesterday was a sad day for me. EVE made it somewhat better. Remember that beautiful R6 (motorcycle) I posted a picture of? Well my new apartment complex doesn't like when you park your motorcycle behind your own car. Found this out when the tow company tried to tow it. Problem is while hoisting the bike, they dropped it. Sad day for me. Fortunately they are paying for damages (although trying to short change, albeit unsuccesfully).

So. On to EVE. I got home from work/tow company/Yamaha dealership and needed to relax. Upon signing into EVE I found the usualy carebearing/moneymaking/war preperations. I hopped into my Tengu and started looking for signature, whether it be a wormhole (which is always fun... unless it goes from one W-System to another.... to another and other and other) for PVP or quick route to high sec, or a plex to run for some good Dark Blood faction loot. So here I am dropping probes in I-E, which leads to to our home system of 5-C as well as M-2, which in turn leads to KEE. For visual purposes see diagram. 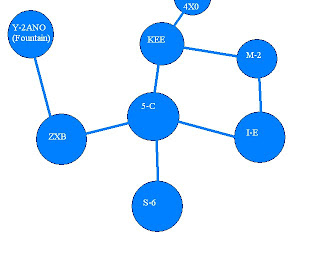 After no joy on the probes I dropped in I-E, I jumped into 5-C. I was sitting cloaked off the gate when the report of a hostile in M-2 was seen in intel. This was intriguing because there were no reports of them coming up or down our pipe. M-2 is in our constellation, but is rented to one of our old time allies. They don't usually share comms with us so all we had was intel channel. I immediately took command of Mavericks in the area and set up shop on the KEE gate in 5-C. Reports of the hostile leaving M-2 came through... but no action in KEE? At this point a new hostile was reported in M-2. Same corp. We could only assume they were loggin on in system. As I was scrolling up in intel to be sure, I looked at my main monitor and saw gate fire... and a decloaked Malediction streaking upwards. Looking back I now realize he was scanning for anomalies, but at the time I just watched, cloaked. Trying to catch him was futile. I reported him incoming from I-E and sent everyone except one fast tackler to ZXB. I was assuming he would move through system quickly and head to Fountain (where we would lose him in the maze) due to the 40 or so Mavericks in system.
I was wrong.
Easley Thames was running an anomaly very near the gate in his Dominix. Easley is often lazy with vent, and therefore was not in comms. So I READ in corp chat that he was tackled by a Malediction, which he found quite amusing. His words were along the lines of "the Malediction is tackling me, if anyone wants to come kill it warp to me". In this excitement the report of a third hostile in M-2, and the second hostile leaving M-2 was lost. It wasn't until I saw a Typhoon decloak off the I-E gate that it clicked. I didn't even bother to tackle him, I warped straight to 10km off Easley. Some of you may be wondering why I wouldn't just tackle the phoon right then and there. I didn't know how he was fit, which means he may have heavy neuting, speed to get back to gate, or friends next door. His buddy was tackling the Dominix for a reason, namely holding him while his buddy in the Typhoon warps in and blows him up. Engaging in the anomaly meant no reapproaching and if there were more hostiles we would have time to ascertain shiptypes/intentions. I was hoping for a stealthy landing, and I got it. Cloaked off Easley's Dominix (which was tackled by the Malediction) I patiently waited. 20 seconds later the Phoon warped in. I dropped cloak and pointed him.
At this point I was screaming for everyone to get into 5-C and warp to Easley Thames, calling the Phoon's pilot primary. Malediction bugged out (we never did figure out where he went to) but the Phoon wasn't goign anywhere. He put all DPS on Easley whilst the active pilots in 5-C warped in and started pounding him. The Typhoon went down slowly but surely. We bubbled him, and I ordered points only on the pod, to make sure we all got on his mail. It was at this point I realized Easley ended up losing his Dominix. I wasn't happy. Had the pilots in system listened to me (I had ordered everyone whether in ratting or mission or whatever to get to Easley and add their DPS) we would have been able to save our ship. Looking at the killmail, however, shows very few pilots with only two damage dealers. Not acceptable. Within the next couple weeks the carebearing pilots who were recruited after Fountain will be weeded out.
Meanwhile, intel reported the third pilot in KEE. Shiptype: Oneiros.
Juicy.
I had just docked, and had to wait session change. The rest of the gang gave chase as he ran up the pipe towards NOL. Switching to an interceptor, I followed the pursuit on comms while catching up on long warps. Our gang finally caught up to him in D-W. As he jumped out of D-W into the next system (4K-T) along with our bubbler and tacklers, I jumped into D-W. I ordered everyone through (in an attempt to bubble/web/scram to prevent reapproaching), but he got back somehow. I saw him enter local as I was landing. I gritted my teeth as grid loaded... there he was, decloaked and aligning off. I spammed the lock button and managed to point him before he could warp. Whew. He, of course, reapproached and jumped back through. At this point a few Anzac were trickling into the fight, and started neuting and adding webs to the picture. Two of them were still in D-W on the 4K-T gate with me when he made it back and jumped into us again. This time it took a minute or so to reapproach, but our DPS was pitiful and he made it back. Jumping into 4K-T he was immediately scrammed neuted and double webbed. I jumped through and added a third web, and he was immobile. Down went the Oneiros, and if you look at the mail he had a couple goodies in his cargo that dropped. It was a good kill. So we lost a ratting Dominix and killed a Typhoon and an Oneiros. Even without the Dark Blood loot we came out on top. Had it not been for the quick pursuit and fast tackle he would have safed up in a sytem and cloaked. Persistence paid off.
That is all.
at 11:24 AM