Last night I moved a clone and several ships with my alt into Torrinos. For those unfamiliar with the area, it is a high sec (.5) to nullsec regional gateway. Along with a few corpmates I was going to camp the Torrinos gate in EC-P8R with cloaky ships. I jumped into a neutral camp with no bubbles, and since I was in a stealth bomber I just cloaked up and warped off to an old safe spot in system. I also had some off gate warp ins, although they were labeled funny (its been 10 months since I was in the area). Warping back in the gate was camped... by blues? Apparently Talos Coalition has set up shop on the gate in EC-. I convoed one of them, who quickly got me in touch with their FC. I got on their vent and provided some fire support for a Megathron who aggressed on the gate and was jumped by their group. With the firepower they jumped in my birds didn't even hit the target. Also popped a Cane in an engagement that... well didn't go that well. Talos decided to engage an evenly matched gang of Defiant and Vanguard. Problem was, they brought in more after the engagement and their popped comrades would re ship in system. I recommended a pull out, but Talos hung in there for awhile longer. It got to the point they were fighting Drake's and enemy logistics were on the field. They finally called it quits but they got beat down pretty bad. I, for some stupid reason, tried to tackle a Manticore who was 20km off me on a warp in (Stealth bombers warp out once targeted if their smart, then warp back onto field). Tackling was bad news. Arazu decloaked and locked me down. I then died, but got my pod out. Not a smart loss I admit. Oh well it was a bomber. A Geddon I had been shooting at died someday during that engagement (probably while I was off field). Apparently he was their FC, and I wish he had been primaried earlier.

I returned an hour later after eating and relaxing and immediately got on a Rifter mail. Guy jumped in and was tackled, webbed and scrammed instantly. A little while later came my favorite mail of the night, and most exciting. Hurricane jumps through to us, and looking at the mail this guy is all gank. As soon as he de cloaks he is burning out of the bubbles, and getting away from the Talos Coalition battlecruisers. I burn out and get web/point on him. Immediately I am locked up and bam, he hits me hard despite my transversal. For those that don't know, 425mm with gyros and tracking enhancers will annihilate small stuff real quick. So I burned off as fast as I could. To add to the mix, Warrior 2s were now on me. Luckily after I burned out about 50km he pulled them off of me and I stayed on field in armor. At this point he was burning away from the fastest Hurricane in our group who was melting his mods to try and keep up. I burned at him in an appropriate approach to keep my transversal up: 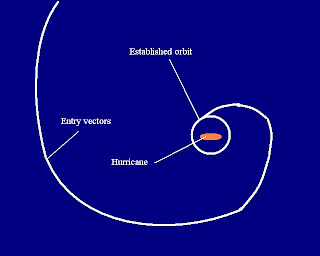 remember transveral is key. For those who don't understand this concept, look at a car driving past you. If you are staring at the road from the sidewalk they zoom from left to right quickly. Now walk in the road and watch a car coming straight at you (note: don't actually do this in reality please) The car barely moves, just gets larger and larger as it gets closer. Much easier to hit. same thing goes for tackler and a boat with good tracking (Zealot, Hurricane, and some other turret boats). By adopting an intercept vector like the one above you maximize your survival factor on approach to orbiting range. Less important when sitting at gate, but when I was approaching him from range, he had me locked before I could lock him and obviously he was aware of my presence and danger to his escape chances.

I am burning at an approach vector like the one above when his drones are back on me. I was still at half shields (horrible recharge rate) so I kited him for a few seconds, dropping a web and point on him and then burning like hell on an escape vector similar to the one above. That 5 second web was enough to slow him down within range of the rest of the guys, one of which had webs. He was done for. GFs exchanged in local... and we asked why he had pulled drones off me at 50km. He responded that I was far enough away to not be threat. True. But 50km is 7 seconds until point range in my Crow. Lesson: do not apply universal standards to range. Different ships have different range factors, and different weapons factors. An interceptor at 50km is practically on top of you. An interceptor at 300km with no warp in gives you a little bit of time to think. Had I died on the first pass/tackle, he would have escaped. That one mistake to pull drones off of me cost him his ship. Important to play these things out in your head prior to an engagement, so you can think clearly when it hits the fan.

Got a Vexor after that, no contest there. At this point I had to be to work in 4 hrs. How about some sleep... better late than never.

Looking forward to more fun. Best part is, the fireworks haven't even started yet. Officially of course. Mavericks are usually known for being some of the first on the scene, and this deployment is no different.

Nice report! At 50km the drones are operating at the very edge of their effective envelope from a hurricane. Max drone control range is around 54km or so? Even if he had left the drones on you I'm not sure that he would have been able to kill you before the drones were out of range. Was he jammed when you made your approach?

Looking at the fit, he made a few mistakes, one being not fitting the medium range tracking bonused ammo or even barrage in a few or all of his guns to give him better protection against approaching inties or ships at range. Next is that he had his drones in his bay when he died, well minus 2 drones, 6 Warrior II's reported on his mail. Not sure how that figured in but I always leave my drones out until I die!

You are correct more than 100 percent when you say inties are still a threat at 50km, but I'm not really sure what he could have done in this case. I would have tried to neut you on your second approach, likely neuted you on your first pass and killed your velocity enough to kill you before you had a chance to get out of range, I also would have been using barrage so a bit better engagement range... stuck my drones on you for the duration since there weren't any other inties on the field judging by the KM. Then again I wouldn't have tried to stay on the field if there was a moment I could have warped out!

Do you manually pilot to get the approach you want? I tend to do so, but it is a bit trickier done than said. Sometimes it is just easier to set a orbit at 40 KM, then 25, then 15 then 5. Either way takes a bit of getting used to.

I usually manually approach in these cases, especially on something with good tracking. Confirming if he had had barrage, that first pass would have been my last. Didn't get neuted on first pass, wasn't jammed on first pass. Second pass he was jammed for one cycle I'm guessing (yellow box dissapeared on approach). I didn't stick around at web range when that cycle ended, as soon as other tacklers were in range I bailed to 20km orbit. He had a couple moments to warp out twice, but he was burning away from gate the entire time... and not in a direction that had celestials. Doubt he would have had time to notice dropped point align and warp before someone else locked him down.