Last night I felt an overwhelming desire to take a gang out. As I got home from work a fleet op was just finishing up. We got a fight with NC, killed some lost some and withdrew as their numbers grew to be far more than ours. We had a faster composition, and were able to move out quickly without being overtaken. This is becoming a theme for USTZ ops.

We left and headed up through ROIR, into Fade and then Deklein. It was pretty empty, so up we went to Venal. We ran into a bomber gang in Venal, but they came in through a different gate and had eyes on us instantly. Knowing they wouldn't fight we moved on. Into Tribute we went. In NJ4X we popped an Ares and an Ishtar. Unfortunately for me, I missed out on the Ishtar (DOTLAN) and had no chance of the Ares as I was in a Drake. But the gang got their first kills of the night, which was good considering we had gone some 30 jumps already.

We were just moving out when my scout reported in quite anxiously "Local spike W6VP uhmmm 10... 15.... 20... 30 I think!" The order had been for fleet to jump into IMK from NJ4X, and once in IMK to warp to the W6VP gate. Lucky for us only some had jumped and none had warped. "Fleet reapporach and re inter IMK warp NJ4X now go go go" was my order. Within 20 seconds fleet was all in NJ4X and moving quickly. Scanning DOTLAN I found a nice quiet constellation to move fleet to about 6j away in just a few minutes. My forward scout kept eyes on the hostile gang, and they only followed for a couple jumps before heading back home, which I assume was D7 or H-W. There was a brief moment when I considered engaging their gang, but my scout reported heavier BC composition. My fleet was lighter and quicker, making it unable to slug it out with theirs. 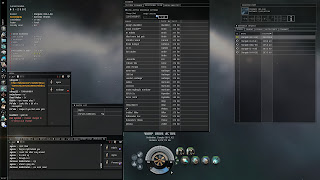 After about ten minutes I felt the heat had passed and on we went. Our course took us back through Venal, moving very fast and stopping only for the occasional target. A few no goes until we hit paydirt.

Eyesu was scouting for me at the time when he reported Nighthawk on scan. We held fleet one out on the gate, and held our breath as we waited for the word. "Tackle on Nighthawk tackle on Nighthawk!!"
Everyone had him on watchlist already and in we went, warping to the Command Ship. "Call your points call your points!" he yelled. Apparently his Dramiel was taking quite the pounding and he warped off field as soon as we landed. I'm not usually a whore (ok yes I am) but this time I made sure our whole fleet was on the mail. The Nighthawk went poof.

In the belt this guy was at was... yeah you probably didn't guess it. An officer spawn. CHA CHING
No wonder he didn't warp out when he saw the Dramiel on scan. He was probably like biatch I can tank you this be my spawn. That was, until local spiked and he dropped a load in his shorts. Ahh, the spoils of war.

At this point my 1-2 hour roam was already past 2 hrs and it was time to head home. Our course took us into Deklein through the OWN Alliance constellation...

As we were about to enter Deklein BIGVIX, who was scouting, reported he had just cross jumped somebody. Not sure what it was, but we did get +1 in local. Our gang was landing on the gate and patiently we waited... DRAKE! Yeah, you know the drill. Pop. The unfortunate part of that kill was that he screamed to all his buddies in more expensive ships next door (around seven of them) and they were all POS'd up by the time the Drakes pod went poof. Now, one note. Please check the Drake mail out... I will link it again. DRAKE MAIL. FFS guys, this is an example of how NOT to fit a Drake. 400MM plate in the lows? 3 Shield rechargers? No LSEs whatsover? Bad bad bad.

For those that are just reading my blog for the first time, I have a special place in my heart for OWN Alliance. A bad special place. I first started EVE a year ago, and joined up with corpmembers I had played HW2 with for years. Somewhat relunctant, I was giving the two week trial a whirl. Within a few days I was in 0.0 in XENO Corp. which was in the pet alliance OWN. I learned fast (and died lots) until  the time came upper leadership had a falling out and civil war between OWN and DE4IANT erupted. OWN got kicked to NPC Pure Blind where it rotted until the day XENO left. The rest of my story I can save for another day.

But yes, I said my hellos in local. Something along the lines of "Tell REDRUM PK and CrusaderXENO say hello". Nothing too confrontational... to which one of them responded "yeah I got on one of your capital kills last week". I laughed and asked him if he wanted a cookie. No response... and on we went to 2R- and YA0. Got a Jag kill in YA0... he aggressed BIGVIX on the gate and we jumped in and killed him. We also got a Rifter, Kestrel, and some other small things on the roam that aren't worth mentioning. By my tally 11 kills and no losses. A little on the short side for how long our roam was... but the Nighthawk/Officer Spawn kill made the night.

Things to remember: when you are fit for speed, use it. I was sorely tempted to take the fight but it would have ended badly. I used our speed and BAM we were gone. The faster you move the less chance there is of a response gang forming and catching you. Keep you scout relatively close in quick gangs. In larger, heavier gangs you need scout(s) further out, as it takes your gang more time to respond. Never ever assume the enemy is stupid. They may be, but you can't afford to be wrong. If the gang in Tribute had a bad FC or incompetent pilots I would have been able to kill them. But if I took that risk and they had good leadership or some good pilots, I would have lost my whole gang (almost). Better to live and fight another day. I mean, we pissed them off. That right there is worth it.