As fighting is intense atm, I shall keep this short.

Last night we took a small inty/Dramiel gang out. Tackled a carrier in TXME- who was ratting in an anomaly.

After 20 min the Chimera died. Funny enough, the guy ejected into a Curse right before dying. His "escape pod".
The Curse died too. It was pretty damn funny.

We headed back shortly thereafter due to formup for major fleet, but managed to pop 2 Myrmidons on the way.

Giant CTA was forming up. I went for a short ride on the R6, and upon coming back I joined fleet. First cyno went up and we jumped. This was the IT composition at the time: 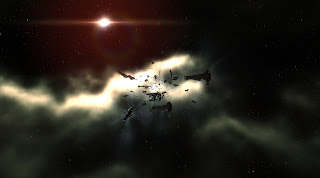 Heavy on capitals. Allies were all formed up and ready for the target.

What was the target you say?

The Hornet's Nest, as Soho always called it.


A few days ago Paik from -A- and myself held a long conversation in a command channel discussing various tactics to go about catalyzing this conflict. We came up with a jab to the the throat as the best way to raise morale for our forces while killing it for the enemy. We had soft agreement from other allies in the command channel who watched Paik and I feed off each other's excitement with our similar thoughts and feelings. Atlas agreed to commit, as did some other allies. I can't/won't go into specific details, but the next day I ran it by The Man (Molle). I left it in his hands, and it culminated in the siege of H-W that began last night for me (morning for you Euro guys). 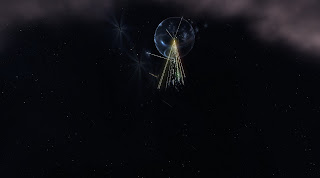 We feinted with SBUs in a system far away, and the NC fleet found itself way out of position when we laid the cards down on the table. Into H-W we went, with little opposition. On NC comms they basically shat themselves when TS spies reported back our destination. We cyno'd into system with caps and subcaps and got to work. Taking down all the offline placeholding small towers was cake. Staging POS's were put up and the H-W station was bubbled.

For those who know history/have been around for awhile in game... 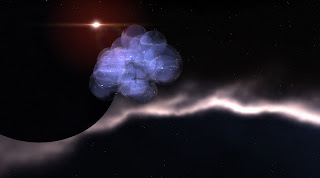 I remember my time in the NC we were always getting raped, i think we lost 500 ships in H-W alone one day! You guys are real bastards, and for that I applaud you :) Kick some A** out there!!

The picture of the bubble station is just...awe inspiring. This conflict between NC/SC is going to get very interesting, very fast with your siege of H-W!

'Bout time you guys sacked up and took it to the NC. Just playing in X-70 and killing moons is small progress at best, and leaves you rather vulnerable to counter-attackes - your opponent can pick the time and place of the fights. Being the aggressor let's you dictate where and when - putting your opponent on the back foot, forcing them to make hard choices, and scoring big kills (many caps) when they screw up. GL to you all and death to the NC!!